Where to Park
What’s next for 2019 Kenny Awards winners

On May 11, 2019, the winners of the Kenny Awards were announced, including the winners for Outstanding Actor and Actress in a Leading Role. Those leading award winners, Penelope Sergi and Matthew Wilson, are now heading to New York City to make their Broadway debut as part of the Jimmy Awards®!

After receiving their nominations in April, our winners along with 10 other nominees participated in a week-long bootcamp, working with the Kenny Awards judges to assess their range, flexibility, adaptability, and skill. 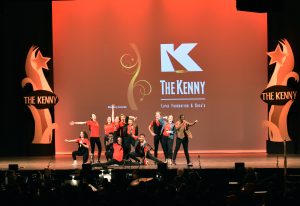 The bootcamp judges then selected the winners, which were announced at the awards ceremony in May. Penelope received her award for her portrayal of Elle Woods in Legally Blonde at West Seneca West Senior High School and Matthew for Jean Valjean in Les Misérables at Buffalo Academy for Visual and Performing Arts.

What have they been up to since their win and what’s coming next?

During the weeks leading up to the Jimmy Awards, Penny and Matt have been going through coaching sessions as well as interviews, rehearsals, and more! They met with past Kenny winners/Jimmy nominees to talk about their experience. And Matt and Penny were interviewed by local television news networks to discuss this wonderful opportunity and share it with the Western New York region.

Matt and Penny talk to Lauren Hall from WGRZ about their win and upcoming trip to NYC.

They spoke to Mike Randall from WKBW about their upcoming trip and plans for the future.

Matt and Penny also spoke to Linda Pellegrino on AM Buffalo.

On Sunday, June 16, they will head to New York City to begin their Jimmy Awards experience. This year, 86 high school students from 43 programs around the country will participate in a week-long intensive before performing in the awards ceremony that will be held on Monday, June 24th at the Minskoff Theatre, home of Disney’s The Lion King. While in New York City, the Jimmy nominees will work with NYU-Tisch faculty and Broadway professionals.

You can follow their progress on Shea’s and the Jimmy Awards’ social media pages, as well as see them make their Broadway debut on Monday, June 24. For more information on the Jimmy Awards livestream, click here.

We wish Penny and Matt the best of luck and to break a leg as they go off on this theatrical adventure  representing the Kenny Awards and the Western New York region!