On Thursday, January 10, students from the 2019 Kenny Awards finalist schools came to Shea’s for a social event planned just for them. The event ran from 4:00-6:30 pm and included backstage tours of Shea’s Buffalo Theatre, musical theater trivia and games, and karaoke. Over 300 students from nine schools attended the social to kick off their journey to the Kenny’s this Spring.

These students would likely not have an opportunity to cross paths with one another prior, so Thursday evening was a successful and joyous gathering of students from as nearby as Buffalo Academy for the Visual and Performing Arts to as far away as Cuba-Rushford (2 hours!).

Shea’s Smith Theatre became the performance venue for students to perform a karaoke number from Hamilton the musical with and for their peers.

Students also received backstage tours from Shea’s staff, including Shea’s restoration consultant Doris Collins and Shea’s production manager Bill Hedrick. These tours brought students through the theatre and backstage to see where the traveling crews and stars work and stay, and where they will be performing in May.

The mood throughout the afternoon was jovial and friendly. The students are now off to continue their rehearsals for all upcoming shows, and will return to Shea’s on Saturday, May 11 for Kenny Day and the awards ceremony. 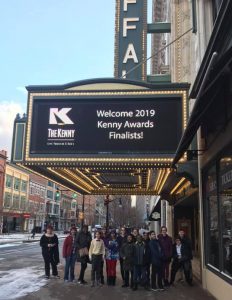 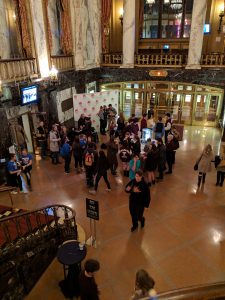 Here about Lane from Cuba-Rushford’s experience at the Kenny Social! Special thanks to JPVideo Productions, the official videographer of the Kenny Awards!